After an extended period of development, we are pleased to announce the completion of our Rover K-Series Supercharger kit. Our test vehicle completed its final mapping session on the dyno with Dave Walker at Emerald yesterday and achieved better than expected power and all elements operated perfectly.

On the rollers the low-compression VVC-based engine package with our own design Rotrex charger system and chargecooler achieved 268bhp (@ 7429 rpm) and 196lb/ft of torque (@ 6396 rpm). We are also happy to report that we had boost to spare and the engine could be restricted to 7000rpm where it would achieve a healthy 260bhp.

The story of the development is a lengthy one! Put simply – after Turbo Technics had discontinued their TT190/215/230 Supersport SC kits we were approached by several customers running cars with these kits and asked to refurbish them. On several occasions this job was completed by TT, but with the caveat that there would no longer be sufficient parts stock to continue refurbishing the chargers into the future. Cue our interest in the K-Series Supercharger concept.

After our success with the Rotrex chargers as featured in the KomoTec Turbodrive kits (Toyota 2ZZ engine) which we have supplied for the last 4 years we decided that a Rotrex unit would be the best placed for the job as there is restricted belt space for any kind of roots-type superchargers in the Elise and Exige engine bay. With an excellent history of performance K-Series builds and durability behind us (some have covered over 60,000 miles now) and some encouraging words from our friend Dave Walker at Emerald, we put into place a development plan. After a few unscheduled tweaks to that plan and a little innovation we found we could create not only a brand new SC kit for the K, but also a super-efficient new chargecooler system and SC upgrade kit for those with the existing failing TT kits.

We think this is the perfect durable performance upgrade for your K-Series Elise, Exige or 340R. It will retain the cars all-important handling dynamics and light weight. Stresses through the rear subframe will remain in the directions nature (or rather Lotus) intended – further retaining the handling and durability aspects of the chassis. It will also help retain the original engine type which will in-turn help future resale value and keep insurance costs sensible.

Through popular demand, we are also working on a conversion kit to allow the Honda & Duretec powered Elise and Exige to return to a K-Series setup using our supercharger kit. More details about this in early 2012. 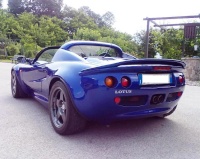