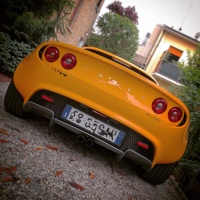 Various security alarm systems have been used on the Elise, but whichever system is fitted,it is most important that the vehicle owner keeps secure records of the transmitter codes and mechanical key codes to allow replacements to be ordered in case of transmitter or key loss. New cars are provided with duplicate keys/transmitters, and the security codes are supplied on tabs, stickers or printed cards, which information should be recorded and kept safely with the vehicle documents.

Spare transmitters and keys should be accessible at all times if the grief and misery of lock outs is to be avoided.

Spare or replacement transmitters and keys may be ordered from Lotus dealers quoting thesecurity codes, and are normally obtainable within a few days. If the security codes have been lost, it is possible for the dealer, having adequately established proof of ownership, to request from Lotus a factory record archive search, for which a small charge is made. This would of course be of no value if the alarm system or lock set has been replaced since factory build.

S1 1996 to 2000 model year Elise is fitted as standard with a Lucas 5AS security module which is electronically matched to the engine management system and provides the following security features:

The trapezoidal transmitter fob has two buttons, one smooth and one embossed with a padlock symbol. Replacement transmitters are purchased uncoded, and are matched to the car by a Lotus dealer using a scanner tool.

Optional upgrade on S1 Elise prior to October 1997 was a Cobra Goldline 6019HF, which meets Thatcham Category One requirements and includes the following features: - Ingress protection using sensing switches on the front bonnet, engine lid and both doors;

- Dynamic coding of the transmitter key.


When the alarm is fully armed, triggering will occur if:

- a door, bonnet or engine lid is opened;

- movement within the passenger compartment is detected.

- the vehicle power supply is interrupted.

When triggered, the self powered siren will sound and the hazard warning lamps will flash. The rectangular transmitter fob has a red and a blue button. Replacement transmitters are ordered quoting the security code.

Optional upgrade on S1 Elise prior from October 1997 was a Cobra 6422, which meets Thatcham Category One requirements and includes similar features to the 6019HF. The round shape transmitter fobs have a large and a small button. Replacement transmitters are purchased uncoded, and are programmed to the car by the owner using the security touch key.

What the manual doesn't mention is that if your fob doesn't work (after changing the battery for example), you don't necessarily have to go through that whole procedure. The S1 manual doesn't tell you this, but the simple sequence to resync the fob is as follows:

1) Remove battery & wait 10 seconds before re-installing (re-sync can fail if this step is missed) 2) Hold down both buttons (remote fob LED will light), holding down for approx.10 seconds until LED turns off. 3) Release both buttons. 4) Press large button for one second, LED will flash…re-sync complete

I did this with two separate fobs last weekend and it worked a treat.

S2 Elise prior to Feb. '02 and all 340R and S1 Exige models, use a Meta vehicle security system, being either an M36 T2 electronic immobiliser meeting Thatcham category 2 requirements, or, as an optional upgrade, a full M99 T2 alarm system incorporating M23 cockpit intrusion sensing and a self powered siren, which meets Thatcham 1

- Automatic (passive) engine immobilisation to prevent the engine from being started.

- Self powered siren to maintain protection if the vehicle battery is disconnected.

- 'Dynamic coding' of the transmitter keys; Each time the transmitters are used, the operating frequency is randomly changed to guard against the possibility of code copying. The alarm will be triggered by any of the following actions: - Opening a door, engine lid or front access panel; - Movement detected within the cockpit; - Energising the ignition circuit ('hot wiring'); - Interruption of the vehicle battery power supply. The transmitter fob with single button is incorporated into the head of the mechanical door key. Replacement transmitter/keys may be ordered either uncoded (if only a mechanical blade is required, into the head of which the original transmitter board may be transferred), or coded (if security code is supplied). New coded transmitters must then be programmed to the car by the owner using a button press sequence.